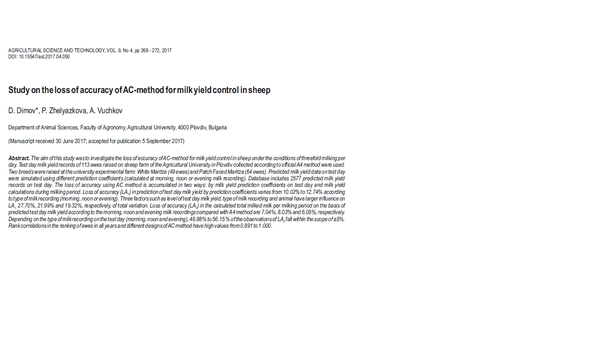 The aim of this study was to investigate the loss of accuracy of AC-method for milk yield control in sheep under the conditions of threefold milking per day. Test day milk yield records of 113 ewes raised on sheep farm of the Agricultural University in Plovdiv collected according to official A4 method were used. Two breeds were raised at the university experimental farm: White Maritza (49 ewes) and Patch Faced Maritza (64 ewes). Predicted milk yield data on test day were simulated using different prediction coefficients (calculated at morning, noon or evening milk recording). Database includes 2577 predicted milk yield records on test day. The loss of accuracy using AC method is accumulated in two ways: by milk yield prediction coefficients on test day and milk yield calculations during milking period. Loss of accuracy (LA ) in prediction of test day milk yield by prediction coefficients varies from 10.02% to 12.74% according 1 to type of milk recording (morning, noon or evening). Three factors such as level of test day milk yield, type of milk recording and animal have larger influence on LA 27.70%, 21.99% and 19.32%, respectively, of total variation. Loss of accuracy (LA ) in the calculated total milked milk per milking period on the basis of 1, 2 predicted test day milk yield according to the morning, noon and evening milk recordings compared with A4 method are 7.04%, 8.03% and 6.05%, respectively. Depending on the type of milk recording on the test day (morning, noon and evening), 46.88% to 56.15 % of the observations of LA fall within the scope of ±5%. 2 Rank correlations in the ranking of ewes in all years and different designs of AC method have high values from 0.891 to 1.000.